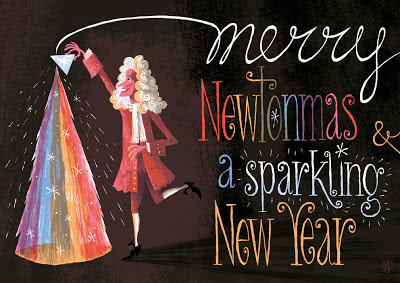 That time of the year if fast upon us once again dear folks so here's my secular way of marking the festivities. The short explanation for the image is that December 25th (might) also be said to be Isaac Newton's birthday... the longer explanation, and my similarly inspired card from last year can be found here. For a funnier 'Big Bang' explanation Sheldon explains it more fully than I can ;-)

To slightly elaborate on this years card... Newton ascertained by shining light through glass prisms that white light, far from being colourless, contains all the other colours (just think Pink Floyd's Dark Side Of The Moon album cover artwork...). Did you also know that, to experiment on how our eyes function and perceive colour Newton took a bodkin needle, shoved it 'betwixt the eye and the bone' and prodded his own eye ball! I decided that probably wouldn't have been the best thing to show on my card, memorable though it would be.

Physics (and anatomy) lesson over, my very best wishes of the season to everyone and to all a very sparkling new year!
Posted by matt dawson at 11:36

A merry Newtonmas to you, too! You're giving the traditional tree a serious run for its money. And I say that as a real sucker for Christmas trees.

Gosh, what a fantastic idea! I suffer writer's block myself at the moment.... good to see that one can find ideas EVERYWHERE.... and this good ;-)
Merry Christmas.