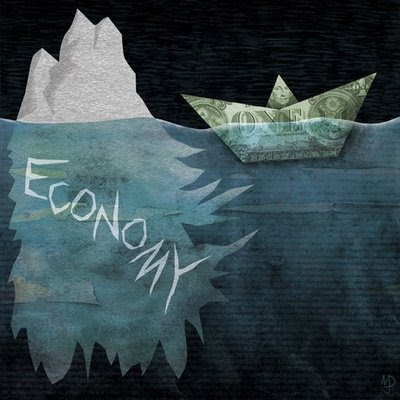 Thanks for the inspiration George! Reading about the US economic crisis in today's paper Bush's clunky grasp on things, "If money isn't loosened up, this sucker could go down" painted the right picture for once.
Posted by matt dawson at 19:18 4 comments: 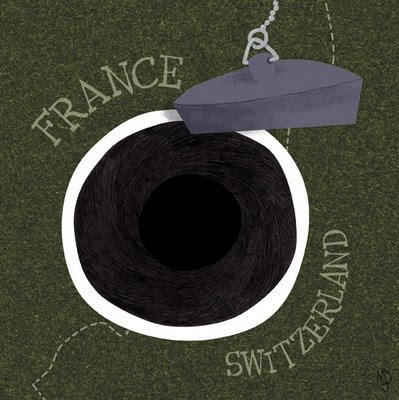 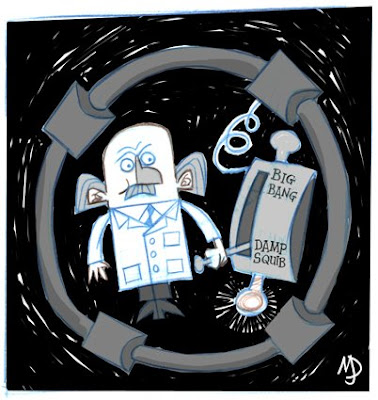 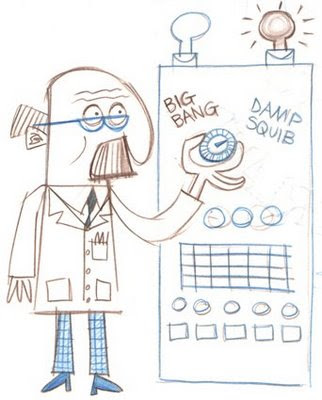 I hear that scientists at CERN have had some problems with the LHC and won't be trying to bang protons together till early next year. I know the whole black hole drama has been overplayed in the press but I couldn't resist the image of plugging the hole till spring. This illustration and the other sketch ideas are by way of me continuing to practice more editorial work. I'm aiming to try and respond to news stories and treat them as if they were commissioned briefs. I'll try and post regularly with finished pieces, or at least sketches and get into a routine. That's the plan.
Posted by matt dawson at 21:00 2 comments: 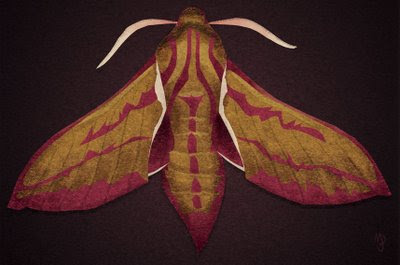 Been away for a great weekend with friends, talking of moths and fossilized aardvarks and visiting haunted mansions. P & T...Till yours makes an appearance here's a placeholder.
Posted by matt dawson at 21:51 2 comments: 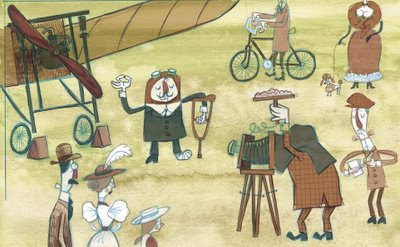 To keep the blog from withering away here's the rough cobbled together sketch/colour study for the next Bleriot. Unconventionally I've been working backwards with my sequence of illustrations... in my world Bleriot appears to be making his journey from mid channel to France flying in reverse! I'm not completely happy with this illustration as it stands so far. One reason for this Bleriot project of mine is to concentrate on the weak areas in my work... namely depicting women and crowds!
Posted by matt dawson at 16:16 7 comments: 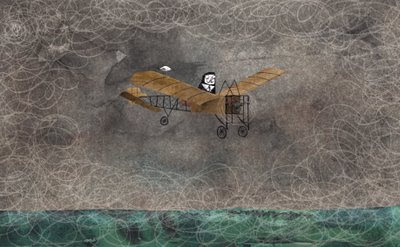 I've tweeked here and there on the original Bleriot fog image to bring it in line with the Bon Voyage illustration. Nothing major needed doing but taken all together it had to be done. Onward and upward!
Posted by matt dawson at 22:20 5 comments: 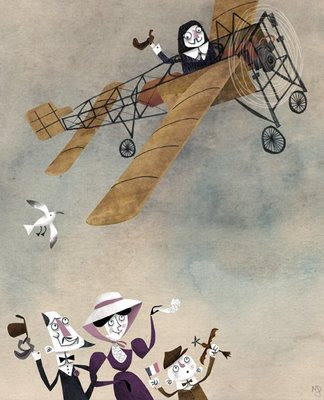 I must admit in my youth I was (OK still am) a bit of an aeroplane anorak (I never went so far as to plane spot though, only airshows and the odd book or two...I can handle the addiction :). Throughout I was fighting a desire to be accurate with Bleriot's plane but in the end I simplified and modified for the sake of what I hope is quirky clarity. For the interested the toy plane the French nipper is holding is very loosely based on the Antoinette IV which was flown by Hubert Latham, Bleriots rival for the channel crossing prize. He tried both before and after Bleriot's to fly the channel, both attempts had a soggy ending for unlucky Berty. The eagle eyed may spot that I have tweeked things slightly from how I depicted the plane and Louis B on the previous 'foggy' image so I'll have to bring that one up to date. Continuity is a never ending curse don't you find...? I did experiment with various handwritten lettering / digital text saying "Bon Voyage" in the space on the middle to bottom right of the image but it added nothing to the overall effect. I think this space is best left for copy text (my original intention) should I ever write a story/caption to go along with the image.
Posted by matt dawson at 15:36 5 comments: 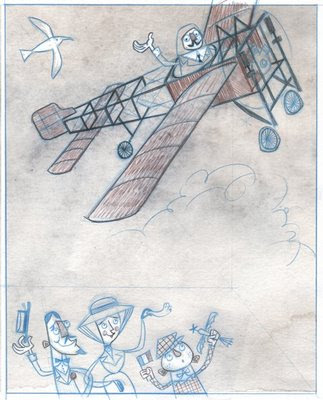 Down to brass tacks as they say. Louis B has finally taken to the skies. Here's my rough underlay for the first image of his journey. I've placed a watercolour sky backdrop under the sketch to see how it sits for use in the final piece.

I was originally intending to do a triptych (France - channel - England) but as I sketch things out it may well turn out to be more like 5 or 6 illustrations. Unlike my normal way of working I'm trying not to plan things too rigidly with this mini projectette but see where the journey takes me.

I'm sure there is a book sequence with this topic...(I'm keeping this in mind when I thing of the dimensions for each illustration) in point of fact I see that the wonderful team of Alice & Martin Provensen have already been and done it with their children's book "The Glorious Flight: Across the Channel with Louis Bleriot". I'm avoiding looking at their work until I've finished my own. It will be really interesting to see how they interpreted the same events and characters.

I'm thinking it might be appropriate to tell the story of the journey in pictures alone, trying to capture that over cranked 'movie reel' flavour of old silent film footage. Maybe just have a suggestion of title cards or a narrator with a, "Now here is the plucky little French man Mr. Bleriot, about to embark on is aerial jaunt across the channel to England. Best of luck Monsieur, or should we say Bon Voyage, and we will have a cup of tea waiting for you." (this last delivered in stiff upper lip British tones).
Posted by matt dawson at 21:10 4 comments: