It's been a drawn out gestation for this screen print design (version one, version two) but at long last I've got something that captured the flavour of the fishing village that inspired me. It's been a personal project I've picked up and put down many times over the last few months but I'm glad I didn't give up on it. 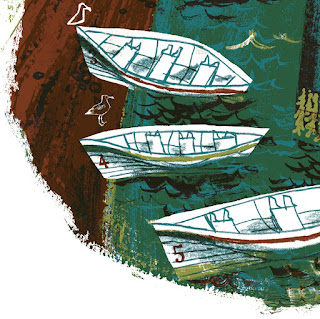 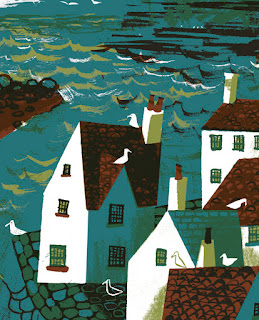 The print has ended up being in three colours as I just couldn't make things work compositionally with two screens and a third mix colour. That being said, as usually happens when I play about with multiple mixed colours, I do like aspects of the design in just two of the three screens. That's the bonus I find in designing screen prints, you get two or more colour designs for the price of one. 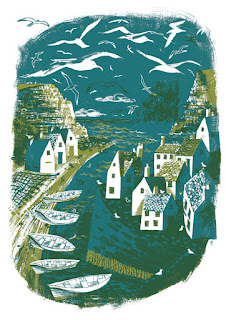 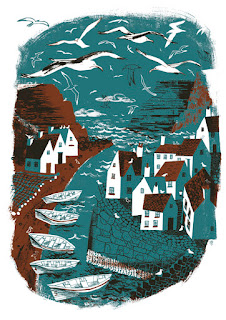 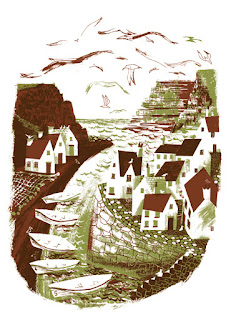 I've worked in a different manner on this compared with other screen print designs I've done. Whereas I'd usually sketch straight into photoshop with the wacom tablet the majority of this is composed of loads and loads of scanned in, very quickly generated ink, paint and pencil elements. Actually compositing in photoshop took a great deal of time though with so many elements to assemble. I've actually surprised myself with the looseness of the final illustration and the balance of stylised and more naturalistic elements. There's so much detail and texture in there that I have my doubts on capturing everything in the screens but the looseness will, hopefully, be more forgiving of happenstance accidents in the printing process as a whole.

Now on with other less seagully things!
Posted by matt dawson at 19:55 5 comments:

Not enough posts over the last few weeks. I'm working on on various bits and bobs so there should be some blog fodder ASAP. Here's a tidbit for the blog smorgasbord (I never get tired of that word... sssmooorgasbordt), my take on an axolotl for a little bit bunny blog. I've been enjoying quick free and easy doodling with an ink dipped kebab skewer on grease proof paper, coupled with loose 'filling in the shapes' painting on a separate sheet. I used a similar approach on my eagle a few weeks back. I love the variation in the wandering lines thickness and the happenstance capillary bleeding of the ink in places too. The mismatched edges of the paint fill and the ink outline seem to give things an energy, pep things up and stop the drawing looking too flat. It doesn't always work as planned but there are nice surprises to be had when you assemble everything in photoshop. It's always fun to shake things up and loosen up from time to time. As always with a little bit bunny creatures there is a cropped view and some development sketches on this blog... pop on over to ALBB for the final illustration. 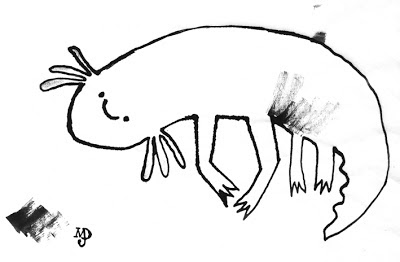 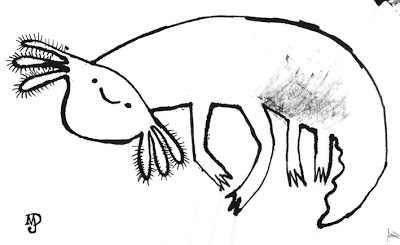 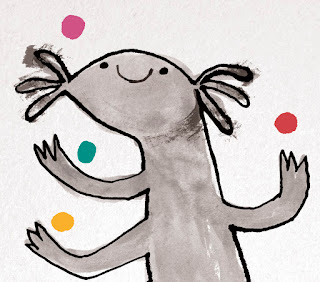