After living with my new blog header for a few days it just didn't sit right with me. Too busy and the elements didn't gel together. So I'll live with my tightrope pachyderm for a while. I think maybe my header will have to change with my moods... I hate to waste things though so here's the old / new header. I did like the orangutan's arm :-)
Posted by matt dawson at 22:49 9 comments: 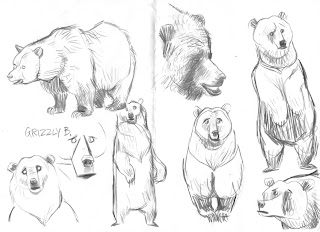 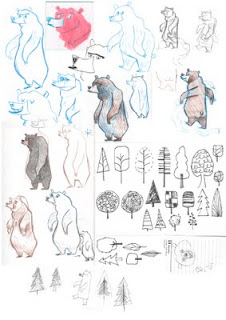 While I was doodling for my Sasquatch illustration I revisited some pages from my sketchbook for ideas on tree designs which I'd played around with for a screen print idea last year about bears doing their business in the woods. I'd still like to do something with this but, for now, I hate sketches to go to waste, and I was very happy with my bear designs, so here they are. With keeping a sketchbook, and with every different illustration you draw it's always good to know that, should a grizzly bear illustration brief come my way, I've at least filled the 'dreaded first empty sheet of paper' with ideas on how I might go about things.

Apropos of nothing, I finally got round to watching The Illusionist, Sylvain Chomet's (him of the wonderful Belleville Rendez-Vous) latest animated film. He based his screenplay on an unfilmed script by Jacques Tati and I must admit to never having seen any of Tati's films, although I understand many sing their praises. Maybe because of that the story left me a little luke warm in parts, perhaps because I wasn't as invested in the main Tati character as I could have been. Why mention the film then... because it's one of the most beautifully realised animated films I've ever seen! Story aside the production design and quality of animation are simply jaw dropping. I expected great things after seeing the equally staggering Belleville Rendez-Vous and I wasn't disappointed. For sheer quality of film making you have to go along way, in my opinion... for what it's worth, to equal The Iron Giant, Disney's 1961 101 Dalmations, Disney's Jungle Book, The Nightmare Before Christmas, The Wrong Trousers, pretty much all of Pixar's output... I could go on...and on... The Illusionist has to be up there with the greats for revealing just what animated films are capable of delivering. I can say no more...see it for yourselves!
Posted by matt dawson at 12:18 1 comment: 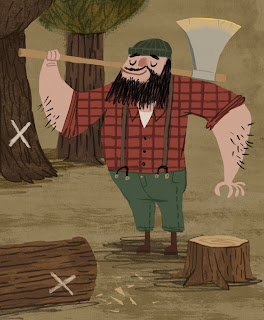 The days sure do fly by! A week has slunk by since my last blog post and a whole month has skittered past which means another A.L.B.B post. This week's creature is Sasquatch, a.k.a Big Foot and here's a sneeky peak of my take on the hairy guy...... the hairy guy Big Foot, not a hairy guy lumberjack... although the lumberjack is pretty hairy too! I'm waffling now. Pop on over to a little bit bunny for the whole picture.
Posted by matt dawson at 12:06 No comments:

blow out the blog cobwebs...

They say a change is as good as a rest so I've decided to open the windows wide, blow off the dust on the old blog and go for a new look. It's nigh on impossible to sum up everything you want to convey on a single blog header but I've opted to stick with my idea from the last header and reuse bits and bobs from past pieces of work. It's fun and surprising to take existing elements and throw them all together to see what you end up with. That said I'm curiously attached to a few pieces of old work, my sad old wonky donkey, my ink splattered hyena and my precarious yet poised pachyderm so I worked them up into headers too. I don't think they are really indicative of how I generally work, but I liked revisting them nevertheless. OK... now I've only got my website to spruce up...
Posted by matt dawson at 21:23 5 comments: