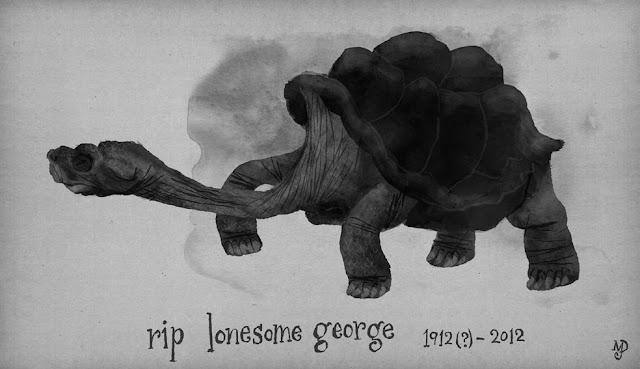 Poor old George. Depending on which sources you read, but the last remaining living specimen of the Pinta island giant tortoise, aka Lonesome George, died on sunday last at the (again, depending on who you ask) ripe old age / or middle age of an estimated 100 years old. The rest of his species were lost when wild goats were misguidedly introduced to his Galapagos island home and ate all the food. Whether some individual examples of the Pinta island Tortoise exist on another island in the Galapagos is open to debate, but either way it's a sad day as we tick off another species that may or may not have still been around had we not buggered about with things we didn't understand. It's not only the goats either... Man more directly played his part in why it is that all examples of giant tortoise are now a protected species. Damn it nature, what were you thinking of, packaging a tasty meal and a drink in one handy living picnic hamper, as illustrated in this episode of QI. Not to get on my environmental soap box, I'm no green angel, but the sad demise of lonely G does paint a picture...
Posted by matt dawson at 17:09 1 comment:

four colour tiger in the forests of the night... 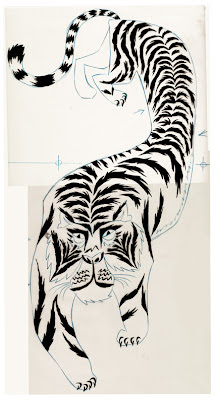 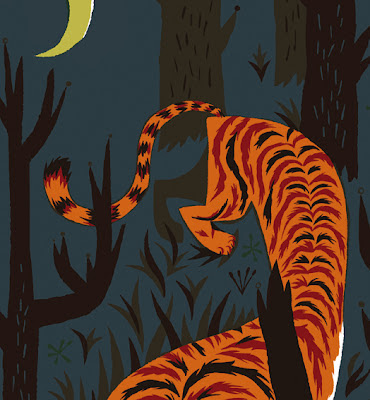 I've gone plant crossed eyed! Enough. It's going to need tweaks here and there before I'd attempt to print it but I've finally finished off my tiger screen print / a little bit bunny submission which I posted roughs developments for previously. After trying out various ways of doing the tiger stripes digitally, non of which were right, I stopped resisting, printed out what I had as an underlay and went at the thing with a brush pen to see what happened. I'm not unhappy with the results, but I have a feeling I'm going to revisit the William Blake Tiger again and again. Attached to this post are the stripe ink scan, a sneak detail of the finished illustration and the four colour screens which go together to make the final image. Pop on over to ALBB if you fancy seeing the final mix. When my eyes have settled down I think I'll play around and see what other colour combos I might also try. That's part of the fun I think with having your illustration as separations like this, just fiddle with the colour sliders in photoshop and voila, a new illustration!
Posted by matt dawson at 21:11 2 comments: 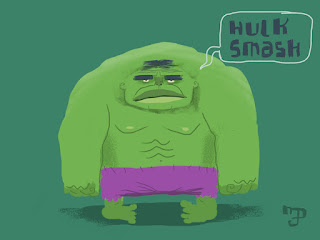 I haven't used my ipad as much as I'd like for just kicking back and trying loose colour sketching. You cannot always get what you're after, even when using a stylus, but this finger painted hulk was great fun to do and has a certain something I'm pleased with. Also seems somehow appropriate, painting hulk with your fingers... Hulk no like puny pencils!
Posted by matt dawson at 21:14 5 comments: