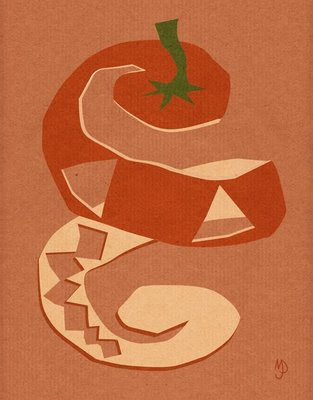 Before the witching hour is upon us and Halloween is over I had to get this idea out 'on paper'. It was my lunchtime satsuma that set me thinking. I don't know that it reads particularly clearly but I thought it worth a shot. By the by, does anyone else feel compelled to get the peel off in one piece, preferably in an S spiral...? :)
Posted by matt dawson at 21:10 8 comments: 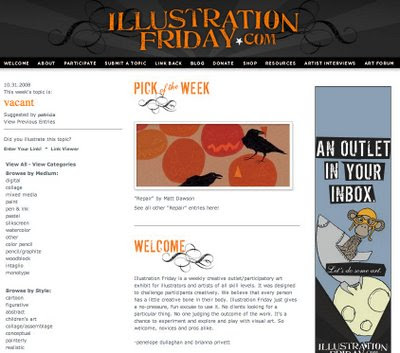 Thank you so much to Penelope Dullaghan and Brianna Privett over at Illustration Friday for making my ravens and pumpkins their pick of the week for this weeks IF topic "repair". The standard of work is so high each week on IF that to be picked out is very humbling and a big boost to my confidence. My sincere thanks also go to everyone who commented, congratulated or just popped by the blog. I really appreciate every comment. Illustration Friday is such a marvellous illustration institution and the IF community is jammed packed to the gills with talented, friendly and supportive people. Everyone turn to the illustrator next to them and give them a hug :)
Posted by matt dawson at 20:49 3 comments: 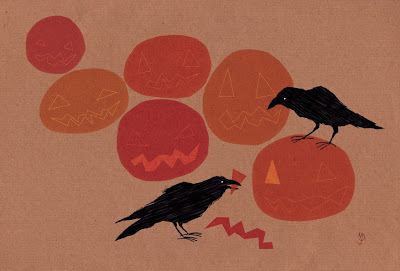 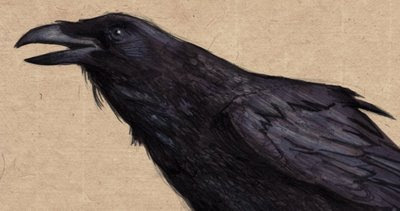 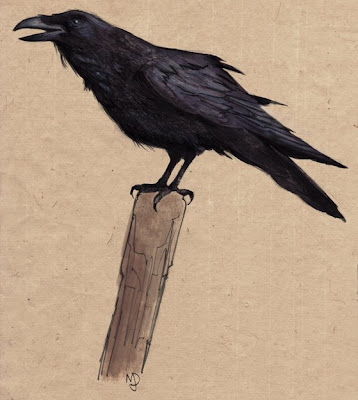 Looking at the Halloween piece again I had to tweak things to make for a more balanced composition. I've also put some quick digital colour on a pencil study that I did in order to get in a 'raveny' frame of mind.
Posted by matt dawson at 19:51 9 comments: 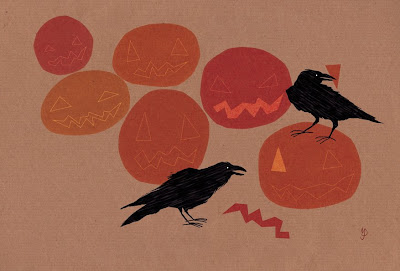 With Halloween so close I couldn't resist combining this weeks Illustration Friday with an All Hallows Eve greeting. I was also inspired by a fascinating account I found of how an individual raven called Grip became the inspiration for both Edgar Allan Poe's "The Raven" AND a character (appropriately a Raven...) in Dicken's "Barnaby Rudge". So here's an illustration of a couple of cheeky ravens showing just how smart they are by putting all the pieces back in the jackolanterns.
Posted by matt dawson at 21:05 24 comments: 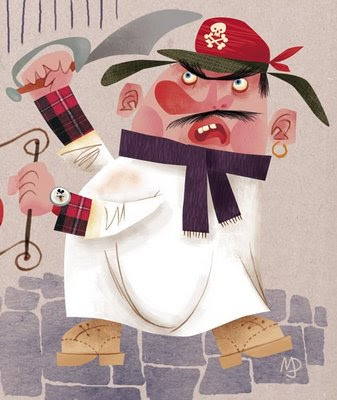 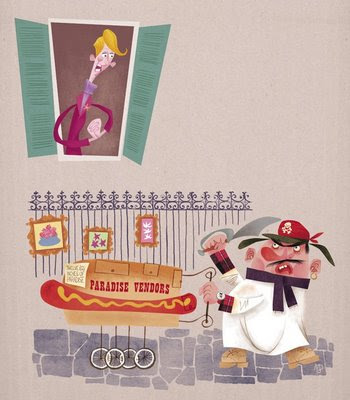 This is my second attempt at Ignatius (previously on mattdawson blog...) as I really wanted to have a go at showing him in his Paradise Vendors role. I'm pretty happy with Ignatius but I think Dorian would require a little work to refine things. At present I'm still somewhat in 'gameshow host' territory. I've taken some small liberties with the staging of the characters, deviating slightly from the book's account. I also tweeked costumes slightly for clarity. The railings and flagstones are based on photo reference of the actual location described in the book (Pirate Alley in New Orleans)... thank you google images. I had fun with it all, though I think I went too far by adding the wristwatch at such a small scale... just couldn't resist.
Posted by matt dawson at 21:46 6 comments: 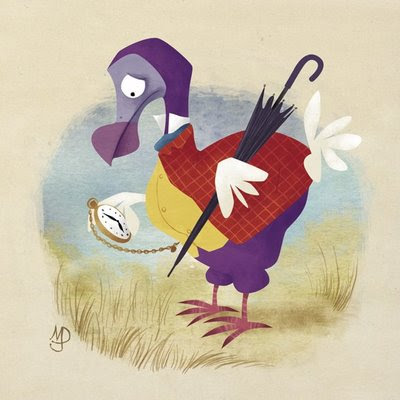 Alice arrived just in time to see it take a gold watch from it's waistcoat pocket and exclaim, "Oh dear, oh dear! Oh my beak and feathers, how late I'm getting!" Alice wasn't sure of the correct etiquette when addressing an extinct bird and after thinking back to her lessons she decided upon, "Good Morning Mr. Dodo, and how do you do?" The dodo gave a quick jump and dropped it's umbrella. "It's not polite to startle people like that you know," it said, wagging a feather and frowning at Alice. "And heavens, you've made me drop my best umbrella. How wet I would be getting if it was raining. Alice looked up into the blue, cloudless sky but decided not to remark on this. "And while you are about it," said the Dodo, "how do you do is most certainly not how you should greet a Dodo in polite society. You must say how do you do DO if you don't want to cause confusion." "I'm sorry," said Alice, who was beginning to think the bird to be a little fussy and more than a little stupid. She secretly thought to herself, if all the dodos were like this one I'm not surprised that they are all extinct. She decided to try and change the subject. "Aren't I suppose to meet you for a Caucus-race in chapter 3 of the book...? And I could have sworn that last time I read this story there was a white rabbit hereabouts." "Curiouser and curiouser," remarked the Dodo.

Once again it's been too long by far between IF posts and I couldn't pass up the opportunity to reference two of my favourite illustrators (John Tenniel and Mary Blair) and one of my favourite reads! Tenniel illustrated the original Alice books with those amazing line drawings that managed to be both accurate and controlled and at the same time expressive and full of humour. If I had his draftsmanship I'd be a happy man! Mary Blair was the polar opposite. She was responsible for concept designs for Disneys 1951 animated feature of Alice in Wonderland, and much of the final look of that film is down to her remarkable use of colour and composition. Although the screenplay adaptation of Lewis Carroll's perfect book left a lot to be desired the film did the seemingly impossible and succeeded (in my humble opinion) in working with the 'source material' of Tenniel's illustrations rather than totally obliterating what went before. If I had Mary's instinct for colour I'd be a happy man twice over!
Posted by matt dawson at 20:03 20 comments:

Stephen Fry is taller than that...

You look at things after a nights sleep and what do you find but a 'stumpy Stephen Fry'. While I was putting him on the rack I thought I'd take my good friend Phil's recommendation and put a bit of colour in his face. I'm enjoying the stylised white face & pink nose look from my Bleriot illustrations but I cannot deny that this pic benefits from the warmer flesh tones. Soupy twist m'colleagues as Stephen might say.
Posted by matt dawson at 21:10 11 comments: 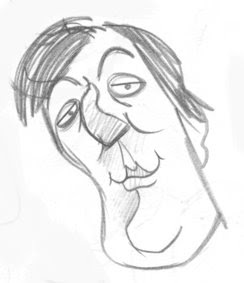 I'm in no way likening the lovely, fluffy Stephen Fry to Ignatius. Both are widely read but there the similarities end! Now I don't consider myself to be a caricaturist. Normally the likeness eludes me but I've been seeing Stephen F all over the pace this weekend, what with watching 'a bit of' Fry and Laurie on DVD, a Q.I repeat on T.V, reading his column in the Guardian, visiting his excellent upgraded website and going to watch his engrossing American series on TV tonight... I thought I'd have a go at immortalising our national treasure.
Posted by matt dawson at 17:56 6 comments: 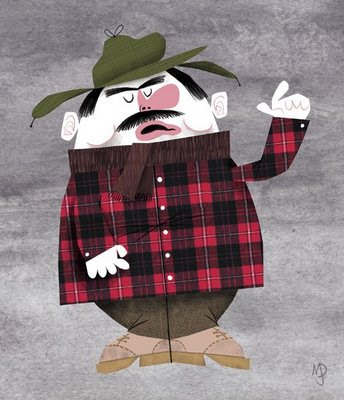 Here's my take on Ignatius J. Reilly, the main protagonist of "A Confederacy of Dunces" by John Kennedy Toole. If you've read it.... well then you know... if you haven't, by crikey hurry up and do so as soon as possible!!! There is no way to adequately sum up this truly wonderful book, and don't just go off the publishers blurb on the back either. All I will say is J K T created a unique living, breathing, opinion spouting, plastic cutlass wielding, belching (thanks to his wayward 'valve') character in Ignatius. It's an hilarious piece of perfectly crafted writing (Toole received the Pulitzer Prize for Fiction posthumously for it) and I urge you to read it at once, if not before.

Thanks to Phil for reading it first.
Here you are Kev, thanks for holding off on posting your Ignatius till I pulled my finger out... cannot wait to see it!
Posted by matt dawson at 18:50 303 comments: 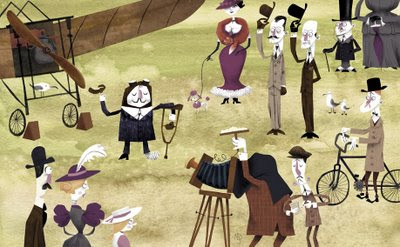 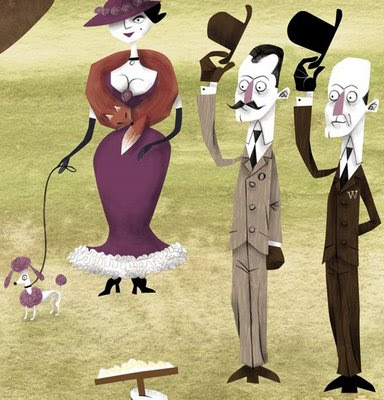 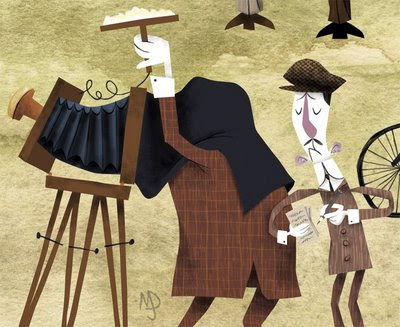 Finally I've finished off the Bleriot French crowd scene. It may not look like many people but I think this is the most characters I've ever drawn in a single illustration before now (unless you count repeating circles for the heads of a crowd in a circus!). For the eagle eyed Bleriot has developed slightly from the other two illustrations. I couldn't resist adding the wayward fringe of hair you see on some of the period photos of him before his flight. I've also warmed up the colour on his flying helmet to give his costume a bit more variety. If anyone wonders about the two thin gentlemen with W & O on their chests I figured (although not strictly accurate to the historical record) that the Wright bros. would of wished Louis a bon voyage had they been there. I'm pleased with the worried cyclist and his red moustache. As to why he looks so peturbed, has he noticed that Bleriot's plane bears more than a passing resemblance to his shoddy old bike? Incidently I didn't give in to the stereotype and have my cyclist with a stripy top, red neckerchief and string of onions, although it crossed my mind for a second. A fact for those who are interested... the Wright bros. built bicycles before they set their sights a little higher... see you learn something new every day. Something I learnt while researching the Bleriot channel flight that I haven't been able to corroborate from other sources was that on as Bleriot started his engine a local dog became over excited by the events unfolding and sadly got chopped up by the prop! That poodle needs to watch out!
Posted by matt dawson at 20:34 5 comments:

the high street piggy bank and the wolf at the door Which of the piggy banks will be the next to fall to the big, bad credit crunch wolf...? I'm sure I'm not alone in thinking credit crunch sound like a breakfast cereal...?! Just a quick idea sketched out direct on the computer. Rather than a tightly designed character I decided to opt for a loose and more moody wolf to try and capture something of the intimidation/villainousness of the big, bad wolf... but I'm most happy with my little piggy bank. What will happen to all our savings and pension pots...?
Posted by matt dawson at 22:38 7 comments: 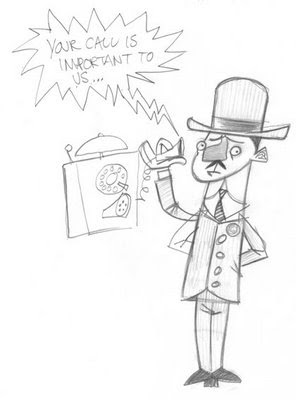 I was kept on hold by the bank this morning...At least I got a sketch out of it, but it took playing a CD pronto to get the awful hold musak out of my brain! Why do they have such appalling tunes...?! Why not play news radio then at least you might learn something and keep up with current affairs while you wait...! Rant over.
Posted by matt dawson at 20:12 2 comments: 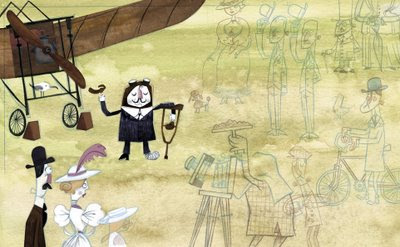 What with one thing and another the blog has taken a back seat for a few days and I'm sorry about that. Hard to believe but I am working on things, here's the Bleriot in progress. What with all the crowd it is taking far too long...(I need to speed up with my process, and to that end I've ditched scanned in pencils in favour of drawing direct with the wacom to mimic loose pencils) I really must finish it over the weekend so I can move things along with Bleriot and then on to the next project (there are plenty on the list!).
Posted by matt dawson at 20:03 1 comment: