The optimist's glass / IF "impossibility" 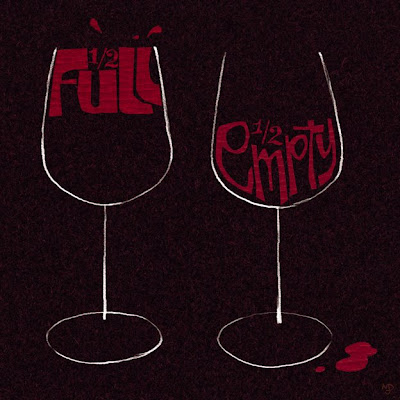 Whatho! I'm back after a few days away and what better way to get things rolling again than with an illustration friday (ok very nearly missed this weeks, but better late than never...). Truth be told this little graphic popped into my head last week but I think the "half full" side of things just about fills the IF bill ... The Optimist's Glass has a nice ring to it don't you think...? Perhaps the title of a nove/...? I've really been on a hand lettering typo vibe of late, maybe my next post will actually have people in it! :)
Posted by matt dawson at 21:53

This is one of the most successful IF pieces I have ever seen....great job!

Nice one, great style and love your wording.

Great work you have here!
I love the style and flow of it!

will be back for more!
Best
Gulzar

This is great Matt - so simple and lovely. I adore your lettering.

maybe the optimist's glass is half full of optimism under your types... :)

so strong and effective image, love it!

Well done! Love the way you handled the type and graphically it is perfectly executed.

Thank you for you showing the respect...the feeling is mutual in all respect!

Great stuffs you have!
Added the following link!

Keep well!
Are you on FB?

I'm lovin' the retro sixties vibe I get off of this. Brilliant concept, and the simplicity of the presentation is just fantastic. Who knew a couple of wine glasses could be so fun.

Wonderful as usual.I look forward to seeing your new posts and illos. And, yes, The Optimist's Glass would be a great title! Can't wait to see what you do next.

I love how your drawing is so simple yet it gets the message across :) Great illustration! Glad to see you're back in the blogging world!

Fantastic as usual Mr Dawson, love the design and execution behind this one.
Digging the lettering you've used in the last few pieces too.

Lovely stuff, as per normal.

Hi Matt!
Your illo is fantastic, simply and contrasted. Love the style!
^_^

There are people that they think but it isn't. there is a huge different that it is perspective that people can influence a lot in decision making.