There's a Lion in my Bathroom - sketches 11 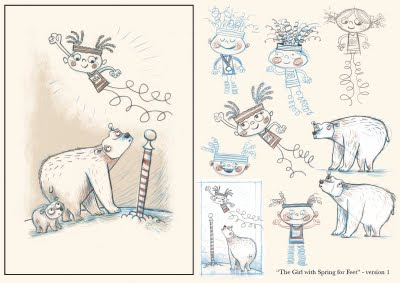 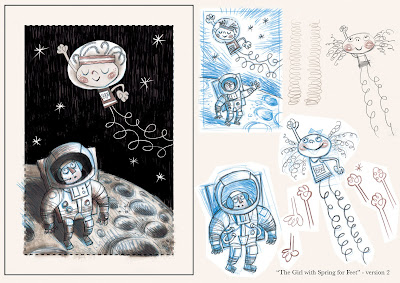 Poem number 11 tells the tale of "The Girl With Springs For Feet." Ok, so I took liberties a little bit and gave her springs for legs, and I didn't stop there. Seems to me that the logical conclusion for a girl whose genes are in such a tangle that her DNA helix manifests itself as legs would also have springy hands and hair too! The text tells of the springy girls epic, medal winning jumps. We need this girl for olympics in 2012! The first leap reaches all the way to the north pole then she tops that by jumping to the moon. Both settings were great for me as I really enjoy drawing astronauts and polar bears. Maybe I should draw a polar bear in a space suit next...sounds like fun! Might be appropriate too. With the mess we are making of the arctic (and antarctic come to that) I reckon it won't be long till the polar bears make like the dolphins in "So long and thats for all the fish" and leave the human race to it and bugger off to a new planet! Anyway, I digress. The polar jump gave me an opportunity to revisit some old characters of mine from a children's story book I planned early last year about a mother bear and her cub. It felt very comfortable to be drawing them again. Onward, keep ticking them off the list. "Sid the Fly" next...
Posted by matt dawson at 13:25

Ha ha! I like polar bear! It's one of my favorite animals!!!

Hello Matt!
I haven´t seen your blog lately but I see you're still as good as always!!Have you ever done a bad illustration? I don´t think so. I´m sure that when you was a baby your drawings were already amazing XDDD.
Well, I always love your sketches and these ones are fantastic, the polar bear is truly adorable. I love his face. I don´t know how to say it in english, in spanish I´d say that his expression is "flipado".

aww so cute, I love the draws, all of them.
Thanks for sharing. =)