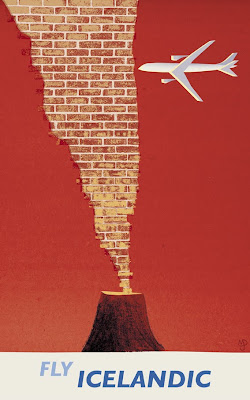 I knew I could do better with this idea and since I've been backing up my files all day I needed something creative to play with. I was aiming for the retro feel of the classic 1950 / 60's airline posters for TWA and BOAC, don't know if I quite got there, but it's fun to try, and as this is still very much a topical story, I thought I'd give it another go. For anyone reading this who isn't in Europe I don't know how publicized the story has been around the globe but the broad strokes are that a volcano with an unpronounceable name ( Eyjafjallajoekull volcano ) in southern Iceland has been doing what volcanos do from time to time and belching out great clouds of ash all over Europe. Playing on the safe side air traffic authorities have called a halt to most commercial flights as this ash can play merry hell with a planes engines, not to mention sandblasting the rest of an aircraft back to the bone. Kinda conjures up images from Dick Dastardly & Muttley trying to catch the pigeon and having their plane disintegrated around them to the sound of a buzz saw.
Posted by matt dawson at 18:12

I think the revised version works really well, 'building' on the initial concept and refining it...

Hello Matt!
It´s a terrific poster, the idea is perfect and very representative. Very well done!
About the unpronounceable name , here in Spain the tv news presenters don´t dare to say the name of the volcano, they only speak about "the volcano of Iceland", as if there weren´t more than 200!! XDDD, cowards

Definately making news down under. Probably because 50% of aussies are in England at some point or other. I love this design, very classy. The plane really sells the retro vibe.

wonderful piece, matt! It's definitely big news over here-in fact, I know a few folks who are stuck in france due to the volcano (not a bad place to be stuck, I'd say!)

you've certainly captured that vintage airline poster feel and your concept is wonderful! you never cease to amaze, my friend...

This is a great piece!
Volcano cloud is right above our heads in Croatia now :)

Wonderful revisions Matt. Much more impact and much better design.

My family was flying in the US during the explosion. Flights all around the world became helter skelter because of the ash. Best of luck to any flying in Europe at this time.

Really good stuff. I really like the design/composition and the retro feel really works :)

so simple and effective, the composition is perfect. I like the font too.

Wonderful revisions Matt. Much more impact and much better design.

Iceland is my favorite place in this world! there's no doubt about it!