Secular seasons greetings to all, and to all a happy new year!

Here's my virtual card... to explain. When I read Robin Ince and Brian Cox's "O Come All Ye Sceptics" piece in the Guardian last week I just had to do a 'Newtonmas' card when I found out Isaac Newton was born on December 25th (unlike other individuals supposed to share that birthdate...?!). To quickly digress, I highly recommend Robin Ince and Brian Cox's other joint effort, The Infinite Monkey Cage podcasts and Robin's other podcasts with Josie Long, Utter Shambles. Now back to the card...

Well OK... so it isn't as straight forward as all that. Now I preface the following by saying I've only dipped into the (sometimes factually murky) pool that is wikipedia to find out more, so a pinch of salt might be necessary...? Depending upon which calendar and religion you prescribed to way back in the 17th century you would say Isaac Newton was either born on December 25th 1642 (if you were a Protestant following the Julian calendar) or January 4th 1643 (if you happened to be a Roman Catholic using the Gregorian calendar). Religion making something straightforward more complicated... well I never. Still, it makes for an educational illustration... there will be a test! For the purposes of this card, and a cheap gag, I choose Julian! 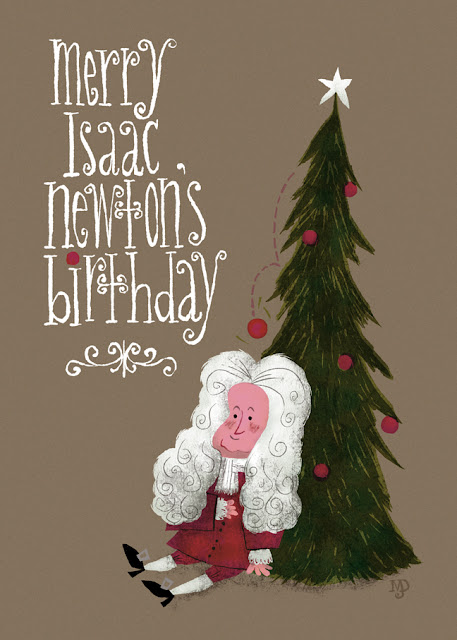 Have a Very Merry Isaac Newton's Birthday and my very best wishes for the new year!
Posted by matt dawson at 12:21

Happy Christmas Matt, great card, and great idea. To muddy the waters even more, I heard an episode of The Unbelievable Truth, again on Radio 4, and it turns out that the story of contact between the apple and Newton's head is just a story. But then that would fit with the time of year, as Santa has an army of supporting parents, despite being factually impaired.

To continue muddying the waters; you appear to have drawn David Cameron in a wig. Was there any relation between the Right Honourable Gentleman and that idiot who's current our premier?

Great card! Keep up the good work and secular ways.

I meant to send you a card. Hope yours was awesome!

Great stuff. I love your picture of Isaac.
Great colours and textures as usual :)