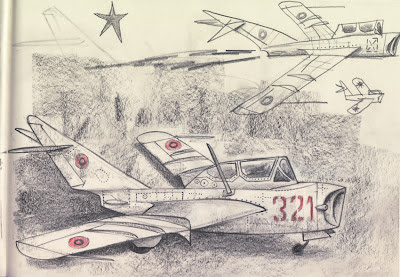 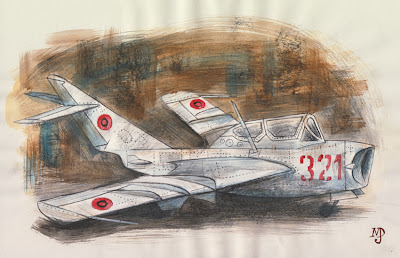 Bit out of left field (or should that be iron curtain...) this blog post, but I'll try and cut a long story short... A few weeks back I was pleased to be approached by the amazingly talented dutch photographer Arthur Mebius about a stylised concorde graphic I did way back in 2008 (gawd bless the internet, nothing gets thrown away...). Arthur wanted to arrange for use of my concorde design in a project he is currently working on (I hope I can post about it at a future date...). Well, long story short (too late), being a bit of a aircraft nut from my childhood I was really impressed with some of Arthur's photographs, especially some of derelict Albanian Mig fighter jets at an airbase called Kucova. I recall also seeing them on an episode of Top Gear does Albania once too (4 mins in... I hope I'm not as boring a geek as James May on this !). So much did I like them I suggested coming to some arrangement and we sorted out a Mig swap... one of Arthur's Mig photos for prints of a couple of mig designs (one and two) I also did in 2008. Then Arthur sweetens the exchange with a few more photographic goodies so I felt I should add to the pot... loooong story not at all short..... hence this painting. I had real fun on it too!
Posted by matt dawson at 14:12