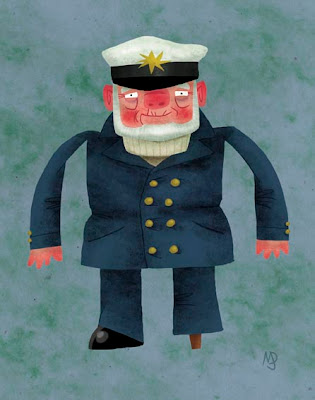 I've had what I thought was Grandpa in my sketchbook for the last week or so but as soon as I went from sketch to colour digital he just wasn't right. I've also been tweaking the story in line with some excellent 'how to' points from reading "Writing with Pictures" by Uri Shulevitz (out has gone the octopus from page15 ho hum, I really wanted to draw him but he was a loose end which I couldn't tie off satisfactorally at the end of the story). Grandpa just wasn't a sympathetic enough character for the story. In many ways I liked having the moustaches in his design (especially for the way in which thay can emphasize expression, I've sketched out raised moustaches for shock/alarm and drooped for sadness/sleep etc...) but they were wrong for the character and kept cluttering up the face, particularly when I wanted to introduce his pipe. Also he wasn't looking old enough and his look suggested to much the admiral and not enough the sea dog. In the story Grandpa is somewhat a figure of fun and as such needed to be less the authority figure (though of course he remains so for Magnus, his grandson). I think this is third time lucky for the Grandpa design.
Posted by matt dawson at 10:48