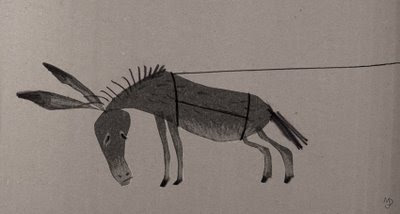 This weeks / fornights / months (I'm not sure which) twisted creature for m'colleagues Phil & Kev is the humble donkey...and it doesn't get more humble than mine. I was initially going to do a "wonkey" and make a play on the legs on one side of the body being too short (is that an old kids joke I've blocked out from my childhood I wonder...?) but as I progressed my donkey just got sadder and more world weary and I realised that's pretty much the essence of donkeys for me. As Phil rightly points out A.A. Milne defined donkeys for all the generations to come with old Eeyore. I added a harness because we always seem to be making them haul something from one spot to another.
Posted by matt dawson at 19:56

I would feel sadder, but I know you people have retirement homes for donkeys. But in himself, he is very weary looking. Tom Waits' "In the neighborhood" came on just as I ws looking at this- appropriate, no?

As for the short legs, you are thinking of sidehill dodgers, sheep which have evolved with legs short on one side for convenient circulating of hill pasture. for real, dude.

it is really weary...but love it anyway.

Perfect. There is soo (two ohs) much character in your poor old donkey.

That's fantastic! Touches of the opening sequence of Watership Down. Love it!

Mate, great body language. He looks like he's got the world's crappiest job, and a nagging wife that he doesn't want to go home to.

what a beautiful image, matt. expertly rendered and wonderfully simple, yet says so much. I love the fact that we can't see what he's pulling so we can all imagine whatever we want...

it breaks my heart. I would take him home and hug him :D

Ooooh! Matt this is the most sad and old donkey I have seen!, I would like that he be a little more happy...
^_^

Free this monkey NOW!!!!
I want to take him home with my two dogs and my two cats. We will live happy and together the rest of our lives.

Your illos makes me feel a lot of weird things....XDD. I love it!

Thanks so much for dropping by my blog and leaving a comment...much appreciated.

Ohhh goodness, I absolutely LOVE this piece! I have a soft spot for donkeys, they're just so dumb and lovable looking.

I've been to a donkey sanctuary actually, where they take in abused and neglected donkeys. I think this poor fellow would enjoy it there.

I really like the simplicity of this piece. You've conveyed so much without over-complicating or cluttering the page. Nicely done.