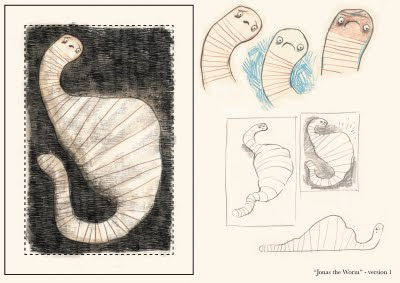 I want to make use of some textures when it comes to the final pieces for the book and this next poem about a worm who overindulges in his favourite snack, what else but soil, gives me the chance to try out a wall rubbing texture (sketch sheet 2) I've had kicking around on my desk for a while. I'm really pleased with the contrast between the dirty, stippled background and the smooth voluminous worm. Hopefully it will give a bit of contrast to the final greyscale artwork. I took inspiration from the wonderful character design of Kaa in Disney's Jungle Book (later used for Sir Hiss in Robin Hood) where the coils of the snake's body were used to create arms and shoulders and not just to serve a functional role, grabbing Mowgli, but also to beautifully express Kaa (and Sir Hiss) personality. How else can you make a snake look like he's sulking! The poem calls for Jonas the Worm to suffer from heartburn, hopefully I'm in the right area, though I did stray into nauseous at one stage.
Posted by matt dawson at 19:38

Your blog is so much fun :D

The facial expressionas on the second page remind me of when you draw a face on the side of your first knuckle and thumb and make it talk like a muppet.

The texture works really well and I love the poor bloated worm! What a shame you can't keep your lovely mutes colour palette for the finals.