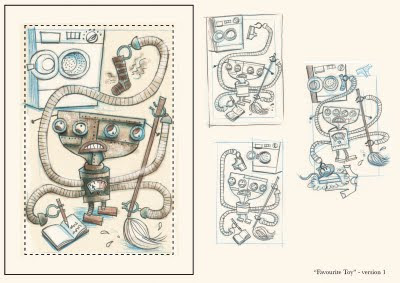 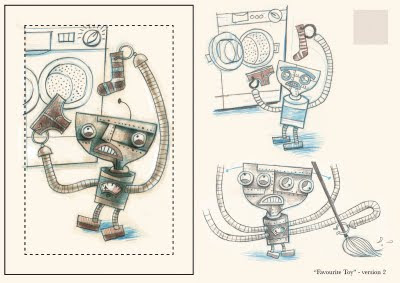 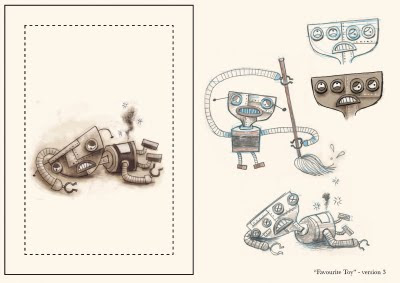 The poem "Favorite Toy" describes the life of domestic servitude of an unfortunate robot named Roy. The young narrator makes poor Roy do all the work and eventually the put upon robot just runs out of juice. I figured that for Roy to keep up with all the demands of his owner he'd need at least an extra pair of arms, and eyes to go with them! And of course (for me at any rate) robot arms have to be of the madly flailing 'danger Will Robinson' Lost in Space variety. It was unintentional but I think I've ended up with a little bit of Picasso cubism going on in the design. Once I hit on trying to get the metal panels to describe the expression on Roy's face I had a lot of fun with it. It's a great opportunity to get some asymmetry as well, which I always find useful in making the character seem less 'wooden' (or, in this case, metal) and more alive. I think if Roy's mood ever improved his mouth would just rotate through 180 degrees into a smile. The bottom eye bags on the left pair of eyes were another fluke as they allowed me to show Roy's less than content mood while also giving him the ability to look up at his work (a nightmare to do with sleepy, heavy lids I find). Once again more asymmetry as they also stopped all the eyes having the same heavy lids. So, show four eyes and you can make your characters show a range of emotions, all at once! That's it, I'm drawing all my characters with multiple eyes from now on :)
Posted by matt dawson at 08:39

Excellent work Matt, this is my favourite yet. I can't wait to see the finished artwork.

It's very interesting drawing! I like it, this creatures is seems like very much on doctor from "Spider-Man"!!! :))))

Yes, this is my favourite yet also. LOVE the little robot - great design Matt!

Ha ha - yes, my favourite too! Lovely characterisation. The 4 eyes work so well and I love the lower lid idea - might have to steal that at some point for my own nefarious purposes... ;-)

'Lost in Space' was one of my fave programmes when I was a kid and I remember the robot very fondly.

Roy is a really strong character! I love so much the third version on the left (with a little bit of Picasso cubism on his face - it fits very well to him) it's so beautiful image!

and last I feel with Roy as a housewife :)

These are magic! The story reminds me a bit of Jed the Humanoid by Grandaddy. Saddest song about a robot I've ever heard.

Those are terrific. I really like the one with the robot collapsed in a heap of exhaustion; laundry will do that to you!