There's a Lion in my Bathroom - sketches 15 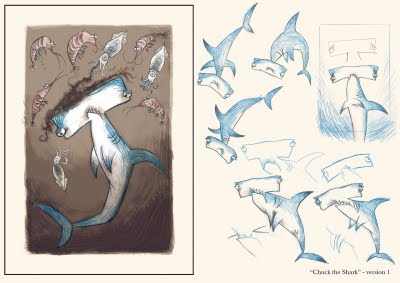 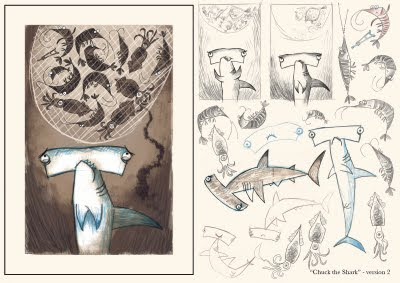 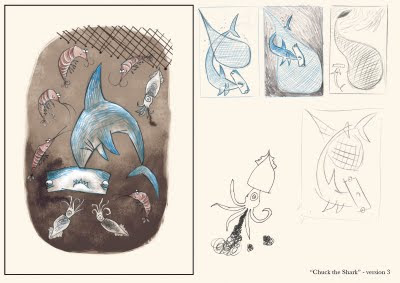 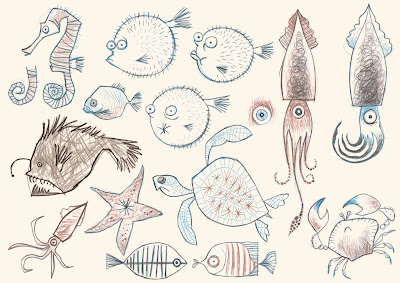 And finally..."Chuck the Shark." Poor old Hammerhead Chuck is picked on by the callous shrimps and squid because of the shape of his head. Even Snorky the limping shrimp joins in, you think he'd know better than that about what it feels like to be an outsider. Still the bullies get their just desserts as along comes a trawler net and scoops them all up. Lucky for them Chuck has a forgiving nature (and sharp teeth) because he comes to the rescue and the shrimps and squid learn a valuable lesson.

This one took a little longer to complete than I expected. The look of Chuck came pretty quickly. In fact the shark design I used on sheet 2 was only my third scribble in the sketch book... normally I waste at least a couple of pages worth before I get a sniff of a direction to go in! Of course I then went around the houses trying out more geometric designs for the head (ala version 3) before I decided what I had originally would be OK. What really took the time was all the secondary characters. I originally thought I could interpret the text in such a way as to have a whole collection of interesting sea creatures to fill the net (see the last sheet). I did try the layout from version two, filling the net with lots of different characters, but it really didn't read clearly enough. Besides that I reread the text a few times and it dawned on me I really shouldn't be using any creatures other than the squid and shrimps. Next came many shrimp and squid sketches (both happy/evil and also sad. Luckily I'd got my shrimp sketch eye in previously with Snorky, and surprisingly, shrimp are quite relaxing to draw on mass. The squid tentacles can run away with you if you're not careful but they are a lot of fun too. On a related note, while gathering image reference for the squid I happened upon pictures of FLYING SQUID... who knew...?! Isn't natural history a constant marvel! Anyway, back to my waffle... I ended up with more squid and shrimp than I needed as, when it came down to populating the net and Chuck's surroundings I felt I should keep the bullies fairly large so they read clearly at size. Enough said! So that wraps it up for the initial sketch work on the book. Hopefully feedback will be positive and I'll start on the final illustrations come the new year.
Posted by matt dawson at 08:53

A delightful body of work there already. I'm sure the book is going to look great when it's done.

Thanks for sharing all this with us - it's been a very informative and interesting process.

Matt, If I haven't said it recently (or before): YOU ROCK!

I don't have words for my impression!!! You are the Best who can to draw ocean's world!!!
Your pictures is so Awesome!!! :)

You're amazing! End of story?? NO, you keep on getting better and better. I'd love to swap prints and buy a copy of your book.

It reminds me of poems by Ogden Nash. The Fly, Octopus, etc.

They're all right of course. Your work is awesome AND keeps on getting better! You amassed a fine collection of images and I can't wait to see (and buy) the book.

It's a shame that the pufferfish won't be making an appearance, he's my favourite. You've managed to get bags of character into Chuck, you have a real knack for getting your characters emotions to leap off the page/screen.

I love all of your drawings! Thea are fantastic!

all of your characters for Lion series are so original - it's not so easy to find something new after Pixar's Nemo but your fishes are brilliant!!

i've loved seeing these sketches. i'm particularly looking forward to seeing a developed angler fish. i think they are one of the most amazing creatures in the ocean and would love to see one by you.

Sweet sketches. I really like all the characters. Sketch when and where you can.

Great work here -- will have to come back for a better look around ... that hammerhead shark cracks me up ... good characters here.

Thanks Matt! Very flattering to get such a compliment from you-- I admire your work. Your skills are incredible!! I love all your posts! :)

What are you currently working on now?

-is that blue line non photo pencil you are using or just regular blue pencil? if it is blue line, what is your technique for getting it out of the finished colored image?

-in some of the drawings, in particular the little bee guys with beards, there is a white paint around the figures in the sketch phase. what is this paint?

i am a designer who is starting to illustrate more, and am trying to figure out people's techniques...

your stuff is really great.

Great post! Keep it up the good work and also keep posting.