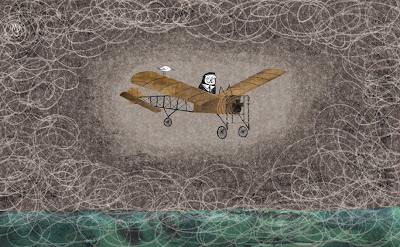 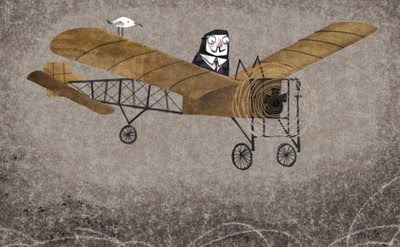 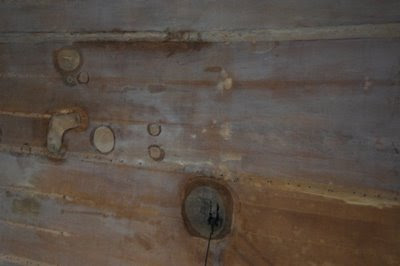 It occurred to me that I could kill two birds with one stone... submit something foggier (not froggier) for this weeks IF while also continuing with my ongoing Louis Bleriot channel crossing project previously on mattdawsonblog. I liked the idea of using a photo I took of the wing from the actual Bleriot XI that crossed the English channel for texture on the illustrated plane (see boring photo). Nobody else would notice, but I know it's there :) When Bleriot made his historic flight he did in fact get lost in fog/cloud and ended up following ships to find blighty, hence the foggy scribbles obscuring his view.
Posted by matt dawson at 19:27

Great idea to use the real texture. Came out great. And I love that the bird is SITTING on the wing! Very cool...

Great texture and lines. I really love the colors used as well.

Nice picture. Maybe you could try applying your lovely textures instead of the scribbles. You always do such atmospheric stuff with your textures.

i've seen your Bleriot before, he looks fantastic and really elegant :) great retro style (without frog)!

I love how you dealt with something as intangible as fog in such simple way.

Wonderful illustration, Matt. The bird on the wing is a really nice touch.

GREAT work! This so fits the prompt this week!!

I like the slightly mad expression on the man's face :) Just the look for someone crazy enough to fly in that fog.

Brilliant, Matt! Atmosphere of this wonderful picture is perfect!

Genius! I thought this was a cool illustration when I first saw it, but knowing you used a photo of the actual wing makes it all that much more cooler. Love the scribbles, love the bird, love his eyes!

Very nice Illustration.
I even liked your homepage
very much.

Dude, I can't see anything - the screen's gone all foggy!

Yeah this is great Matt, really, really like it. Character, the plane is much improved too IMO and I very much like the wheels now!

Excellent scribbles! The plane looks even more precarious and old-timey than it did before, I like how the wheels aren't even connected when you look closer! To echo lots of others, the bird is a lovely touch too.

definatley foogy, but lovely all the same

Excellent piece Matt. Loving the seagull and the fact that there is some genuine Bleriot texture in there.

Many thanks for the Brillante Weblog Premio award too.

Haha, great design as usual. I love the seagull perched on his oh-so-slow plane :)

Hello Matt! Thank you so much for coming to blog! You have great illustrations here! I've been looking your site and everything there is so good! I loved the Sketchbooks!!