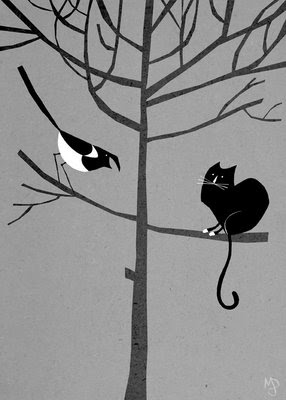 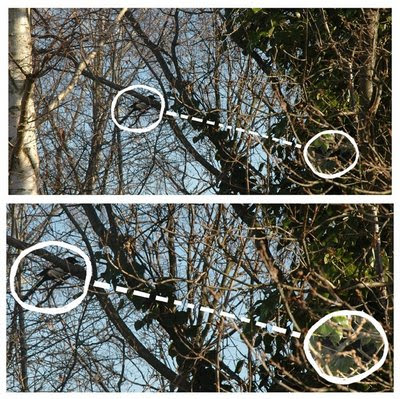 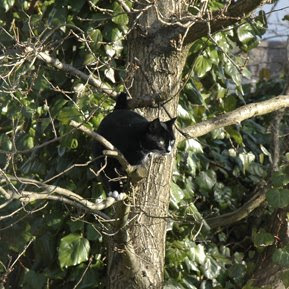 Forgive the poor photo... I didn't want to go get my longer lens in case it all kicked off! Believe it or not you can just make out the cat's eye in the bottom ring... honest.
Posted by matt dawson at 16:50

hehe! LOVE it. You and I were thinking in the same feline way! How funny. Even choosing the bird avatar. Made me immediately click into yours. Great job.

Great story and elegant illustration, I love the cat's socks. You've got an Aesop's fable thing going on here.

Cool illustration and great story. Goes to show inspiration comes in the most unlikely places.

Great! You got it!

I like how you interpreted the scene and linked it to this week's theme! As usual, I love the little details..like the cat's little white paws. :)

Gotta love that animal instinct. Great illustration. That magpie is big enough that if I were the cat, I might have to think twice before trying to catch that one. ~ AC

Love your illustration! That could be my mog there! She's black and white and often to be found lurking in trees!

Fantastic piece and great choice for the theme of this week!
The composition is amazing, simple and very effective. The color is great and.....well, I think everything is brilliant in this illo. I love it!

Great illustration! Love the straight forward black and white (and the tones in between).

(I must become a follower of your blog. Illustrations...too...good.)

Great Illustration! Love your use of gray and black and white. The concept is excellent.

Love this, you've really caught the tension between the magpie and the cat.

what a lovely illustration. some time ago, maybe even a couple of years, there was a story on the bbc website about a very aggressive kitty who found fame when a poor bear got stuck up a huge tree after the kitty started staking him out at its base. it took hours for him to get down and only after she gave up. i think i still have the picture which i will try and dig out for you :-)

A very lovely illustration... and the origin of, simply incredible...

Lovely illustration and the story/photos that go with it.

I love when inspiration presents itself so! Such a wonderfully designed illustration. :D Thank you for sharing such a fun story!

That's pretty funny. I like the expressions on the bird's and cat's faces. Good stuff.

I love your Moggy and the Magpie illustration.

love the story, LOVE the illustration!