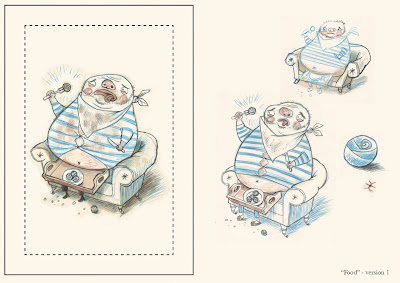 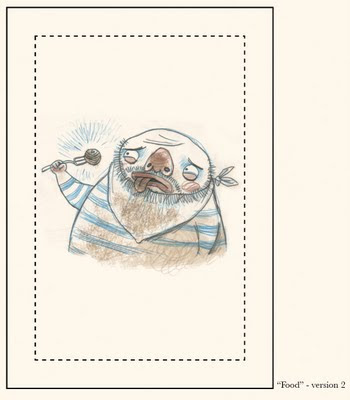 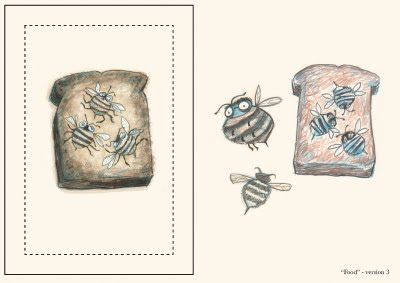 The food metaphor is appropriate with this next set of sketches for the poem titled "Food". What you need to know for this one is that the unnamed narrator spends three verses describing all the unpalatable and downright inedible meals they would happily scoff (bees on toast being but one unsavory dish...). However this glutton, like so many right thinking people, draws the line at sprouts! I really didn't want to only go with the obvious on this one and simply show one or more of the weird foods. Bees on toast is there as a straightforward illustration but right from the start I wondered who it was that was enjoying such a varied diet...? He started out seated at a table but the logical conclusion for me was to make him a 'beached whale' of a couch potato. If you wonder why the stripy top, he's vaguely modelled on a 'big boned' tutor I had at university who always (well in my memory always...) wore horizontal striped tops. Maybe the guy was tiny and the stripy tops were an optical illusion that made him look wider than he was...? Anyway fat men wear stripes (wasn't that a Steve Martin film...?!). I digress but this ramble on the subject of the fat, slovenly and unkempt reminds me of a PG Wodehouse quote I heard regarding an untidy, disheveled man who "looked like he'd been poured into his suit, but forgot to say when..."
Posted by matt dawson at 19:10

bees on toast is such a cool image! I do love your characterisation of the guy, he looks pretty greedy and repulsive!

Fantastic work. All these Lion in My Bathroom sketches are just brilliant! This book will definately be one for my collection when its done.

Really enjoying the process you're showing. Lovely work - I can see how much fun you're having!

Not sure why, but in the larger picture, I'm reading the neckerchief as an old seadog's beard!

you're really great at character design! this guy really looks like he just ate something strange and his stripey top (that suits him so well ) reminds me of some dirty old sailor :)

Love the facial expression, man, those are a lot of allusions in one little paragraph.

Hi there - Giles sent me a link and I finally found the time to look in. It's looking lovely! Definitely go with the bees on toast - a fab image.

I don't like much poem, actually I don't understand the difference between a Lion and the kind of poetry, so the images are perfect.