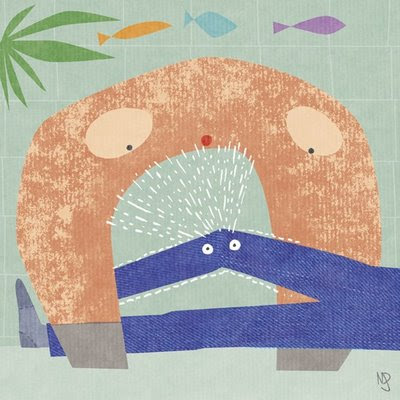 I just had an MRI scan on my knee this evening. A fairly out of the ordinary situation to find oneself in. Ay least they let me keep my jeans on (flappy open backed gowns don't do anything for me). Now why do product designers colour weird looking bit's of medical kit a 'soothing' pastel hue? Do they think a large crashing and clanking tube which has half swallowed you up is going to be any the less intimidating because it's coloured a delicate apricot...? I would have preferred it if they had decorated the machine fascia with a freaky far out yawning face ala Beatles Yellow Submarine. Besides any soothing effect this pastel apricot might have provided was cancelled out be the only thing I could read properly from my angle, a little slot labelled "laser", right above my groin. I kept having visions of Goldfinger..."no Mr Bond I expect you to die!" There was also a similarly well intentioned soothing tropical mural painted on the wall which I wouldn't of minded looking at, if only to stave of the 20 odd minutes of boredom. The only problem was I was too concerned about keeping still to have moved my head to have a look. Funny isn't it how it's so much harder to remain still when someone tells you to...? I'm talking to you spasming left knee!
Posted by matt dawson at 21:38

I have an MRi scheduled every 2 years. What I find hysterical about the experience - and I don't know if British doctors do this - is that the technician congratulates me on lying still as if he/she were talking to a small child. I can't imagine too many situations where this is a skill you'd be praised for, except possibly an encounter with a wannabe necrophiliac.